In this article I describe how one can set up a continuous integration / continuous delivery (CI/CD) pipeline using GitHub. This text is inspired by two sources. First one is “Nine simple steps for better-looking python code” by Vladimir Iglovikov. He gives the keys to better coding practices with CI/CD systems as its core. It is a great article and I wrote mine following the steps outlined there. So, “A practical guide for better-looking python code” is an accompanying/practical guide to Vladimir’s text. I advice you to go through the “Nine steps” for an overview of various approaches, although “A practical guide” could be read independently.

Second source is more subtle, and it is Joel Grus’ Ten Essays on Fizz Buzz where he describes ways to solve the Fizz Buzz coding exercise. While it provides the 10 solutions, it is more a discussion on Python, Maths, Testing and Coding. And if you don’t know Joel Grus, check out his presentation about his everlasting love towards Jupyter Notebooks.

Here are some resources that are associated with this article:

I. Do not push to the master branch

The idea is that we want the master branch to contain the main code for our project. Even if we work on our own, it might be a good idea to always push to a different branch, and then integrate the code to the main branch through a pull request (PR). That way we can introduce various checks on pull requests, and impose structure on them. Let’s see how we can do it in GitHub.

I create an empty repository to illustrate how one sets up a CI/CD pipeline step by step. So far it only contains a README.md file. It also has only one main branch, and nothing else. I clone it locally: 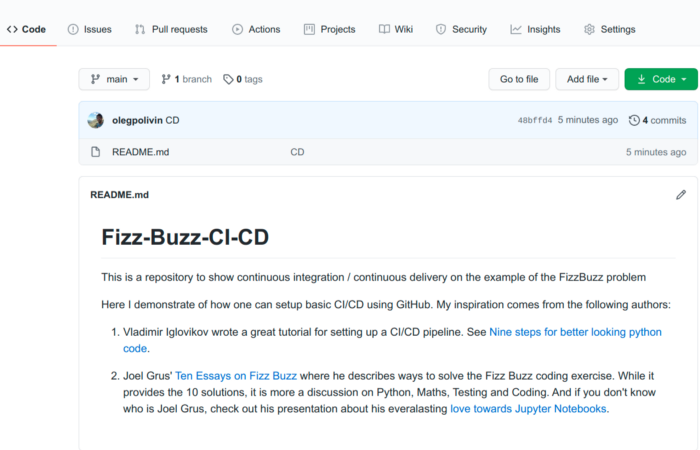 As usual I can work on the code, and then push to the main branch. That’s what I want to prohibit. Go to the Settings menu for a given repo and choose Branches.

There are two ways to prevent pushing to the main branch, and you can choose it in the Add rule section. They are:

1) Require pull request reviews before merging. As it is written below:

when enabled, all commits must be made to a non-protected branch and submitted via a pull request with the required number of approving reviews and no changes requested before it can be merged into a branch that matches this rule.

However, indeed, this will prevent you from pushing to main branch, but you cannot be a reviewer of your own pull request as of November 2020. Therefore, if you are working on a project alone, this won’t let you merge PR into your main branch.

2) Setting up a CI/CD pipeline.

Click on Add rule, and here is the rule that I’ve added: 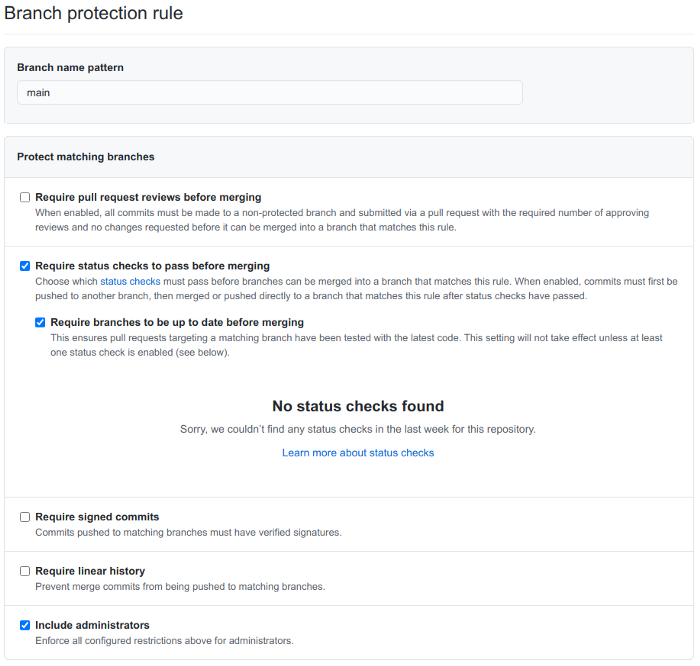 In particular, I have added:

Let’s see how one can set up a CI/CD pipeline, so as to prevent pushing to the main. See the next section.

In order to start with CI/CD using GitHub Actions one just needs to add a config file to the repository under .githib/workflows folder. You can find my configuration here.

The most basic configuration file might be the following one:

It is not doing anything important. It makes use of GitHub Actions and the only thing it does is printing a python version, in my case “3.7”. Creating a pull request will run the script above. Pull request will always pass all checks, because the script checks nothing. However, the whole procedure prevents you now from pushing directly to main. Later we will add code formatters and a linter to this script.

Set up a rule for your branch

It is necessary just to add some modifications to the Settings -> Branches -> Rules part. See what’s new: 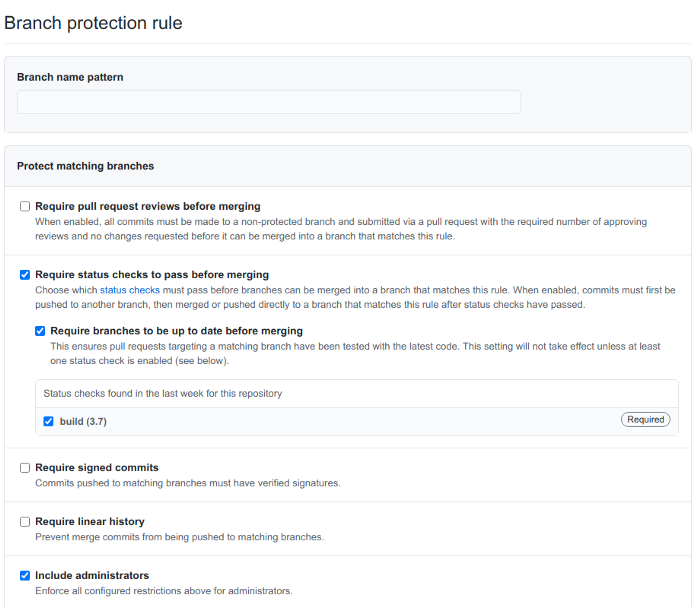 Notice that build (3.7) has appeared among status checks. This corresponds to the name of the job (build) and python version 3.7. I made a small modification to the README.md file, and let’s see if I can push it now to the main branch. Here is the error I get:

Nice! The commit is rejected because a required status check is needed. Therefore, let’s push to a new branch. Locally, let’s create a new branch

A new branch called dev is created on the remote repository. What’s left is to create a pull request, and merge it to the main branch.

It becomes possible to merge after all checks are run: 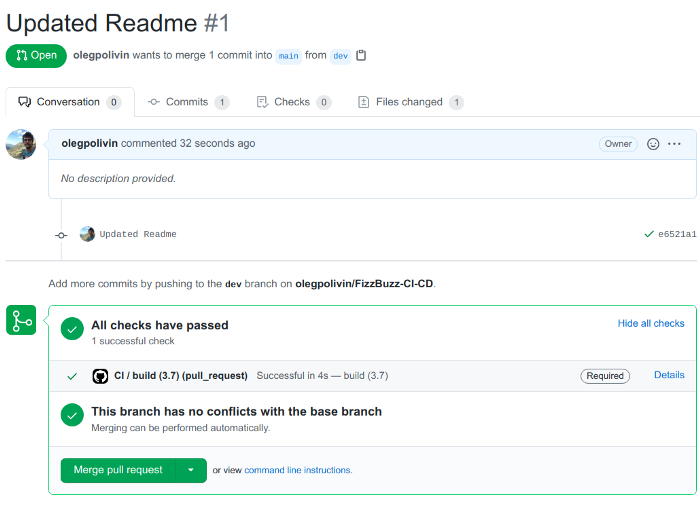 We would like to introduce actions or tests to be performed, before the pull request is ready to be approved, so let’s provide code that will be actually checked. We will consider solving the FizzBuzz problem, see the next section.

OK, it is time to write some code!

Fizz Buzz problem is a task that sometimes people get during coding interviews. It goes like this (I take the definition from Joel’s book):

Imagine we come up with a great code:

We were in a hurry, so we first imported everything that we usually import, made comments to visually show where the code starts, and printed if - return statements on the same line. Clearly, there is no newline at the end of file, who cares since the code is so great!

Actually, we do care because the code needs to be readable and beautiful, and we decide that it is a good idea to impose structure on every pull request. Also, code must pass linter checks and be formatted in a unified manner. It is possible to add all the necessary checks that we want to impose in the ci.yml file that we created in the previous section. Let’s say we add:

Let’s now try to push the solution above to the repository. 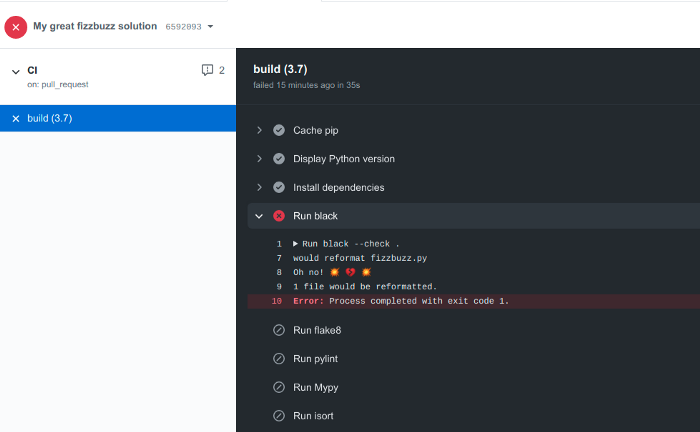 And we see that it fails on the first check. When it fails it does not proceed to the next steps, but it turns out that the code above for solving the FizzBuzz problem will fail on every check.

A better version of fizzbuzz.py

The code below passes all of the checks that we have imposed on it.

Now when we push it to the dev branch, pull requests could be merged into the main branch since all checks are passed.

Catch the problem before committing

It might be that you want to learn that there are problems with your code (that is, it does not pass a check that one imposed) before committing. Yes, you will run the tests locally, but what if there is an additional point of control that does not allow you to commit your changes unless all the checks are passed? It is called a “Pre-commit hook”, and more on how to set it up in the next section.

Link to the original and complete description of the pre-commit hook here.

Setting up the pre-commit hook

After the file is created in the repository, run pre-commit install to install pre-commit into your git hooks. Et voilà, now the checks will run each time before the commit.

Here is a small test: let’s change the neat fizzbuzz.py code to get back to the one that does not pass the checks and see what happens. Here is a part of the result: we see where it fails. Note that the pre-commit hook modifies files for some commands (like black or isort).

Coming back to the neat version of the fizzbuzz.py, the pre-commit hook test is passed. That’s how it looks like in my case:

Finally, we want to not only check the formatting of our code, but also make sure that the code works correctly. We can add unit tests to the CI/CD pipeline!

In this section I show how to integrate unit tests into the CI/CD pipeline, and again we will make use of the ci.yml file. Personally, I like the pytest framework, and that’s what I will use in this section.

Setting up the test

There is only one function to test (fizz_buzz.py), and it is quite simple. I will put the test_fizzbuzz.py function directly into the root folder. The structure of the current github project is as follows:

Append the code below to the ci.yml file:

And here is the result: 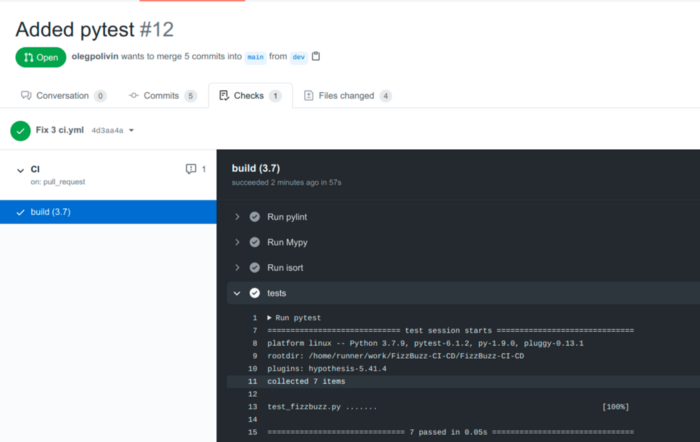 But that was the case when everything is ok. We are happy.

Now a new and innovative idea comes to our mind. Why overcomplicate the code, why do we start from “15”? Let’s “sort” the if-conditions in the code, the code will like so nice! So, we change the fizzbuzz code to the following one:

Great, let’s push and see that one test has failed: 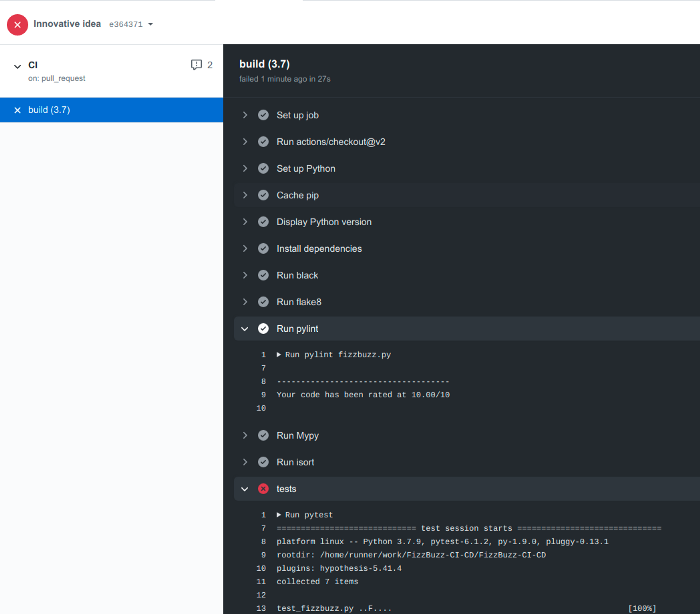 That is, by introducing unit tests into the CI/CD pipeline we were able to catch the problem before merging pull request into the main branch.

That’s it for now. I hope you find this practice guide useful, and will apply it in your work. Try implementing just some of the steps or all of them: it feels great when you see it working in practice. I encourage you to read the “Nine simple steps for better-looking python code” for even more ideas on the subject.

I would be happy to get your comments and learn your ways to perform CI/CD and keep your code clean.

This article was originally publised on medium.

Subscribe to our weekly newsletter and join our Slack.
We'll keep you informed about our events, articles, courses, and everything else happening in the Club.